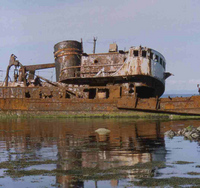 Let’s just hope that if you’re using it, you’re making the same undocumented assumption as those who developed the spec. Unlike Henry Thompson.

I’m also reminded, unfortunately, of something from the W3C Process document;

W3C recommends the wide deployment of its Recommendations.

Sigh. The W3C needs the equivalent of an IETF “Experimental” label, me thinks. Or perhaps a whole new track, perhaps called “Stuff that Members want to work on because they don’t understand the Web”. 8-)